Create a want for specific items you are looking for and we will email you when a match is found.
Add Want

Receive notification of new arrivals in your topics of interest.

After just two months of semi-chaos following the fire, and the feeling of camping out in temporary quarters we made it this week into our new HQ.  In the picture we are the long pink building, just to the left of centre.  Hopefully, when the weather co-operates we'll be fresh in new pink paint.  I've been asking for it to be done for weeks since we knew we were moving there, but it seems almost impossible to create a sense of urgency about such things in the world we now inhabit.  It'll get done eventually I suppose.  I certainly know I'll not be out there with a paint brush in hand anytime soon.  The whole street would need re-decorating and re-tarmacing by the time I was finished, (arguably it does anyway, according to a recent visitor).

In the early hours of Wednesday 6th October 2021 Cosmo Books was entirely destroyed in a fire, from an arson incident at a neighbouring unit behind us.  Nearly our entire stock of about 170,000 titles was lost, with just a handful of lucky survivors.

However, we have begun listing again and now have a modest selection of material available.  Lots more will be added in the coming weeks and months, and the aim is to get back to a similar range of titles as previously on offer, so do please keep checking back to see what is being regularly added.  Our service remains as speedy as ever.

A picture of before and after. See more by clicking on the picture. 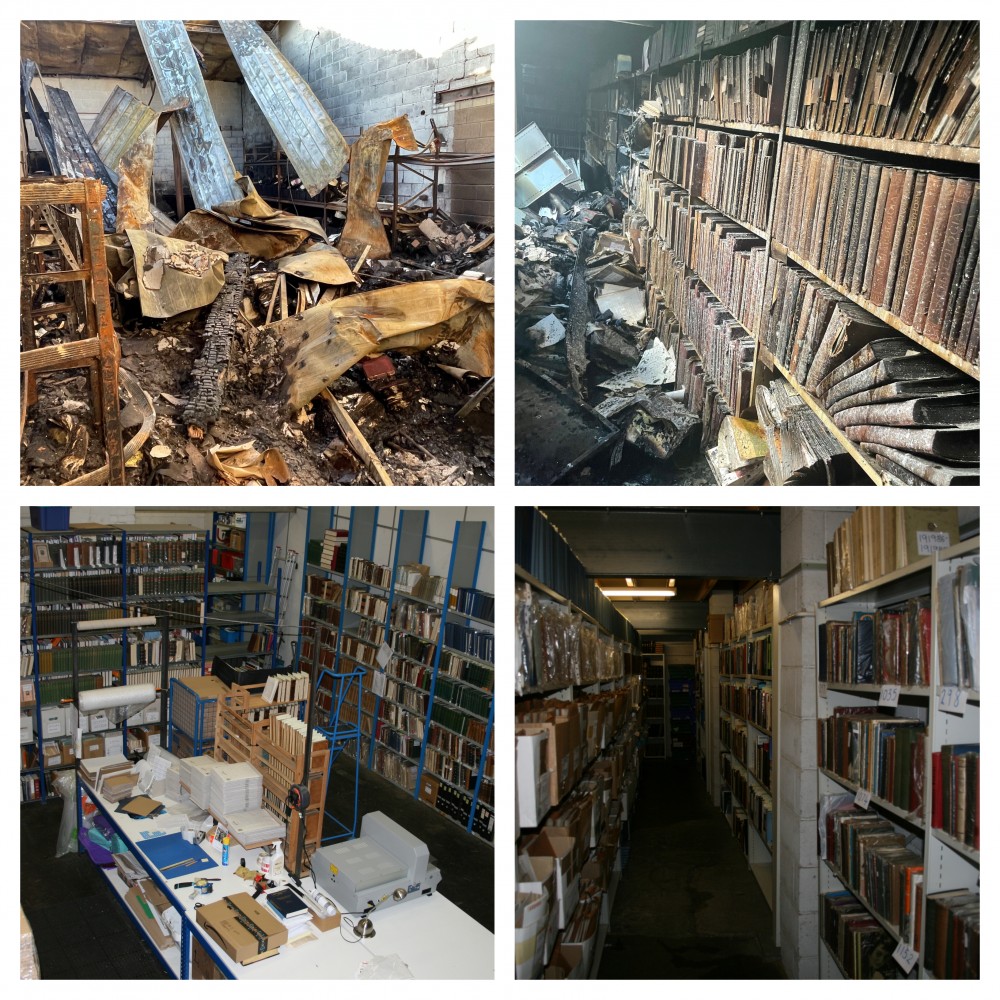 We now have a YouTube channel where you can see our books, journals, and articles "in action",  usually with nice music, sometimes even with a bit of talking.

History has become one of the major battlegrounds in the culture wars that are causing anger and alarm across the democratic world. They are particularly virulent in North America, Australasia and Britain.  The abuse of history for political purposes is as old as history itself.  In recent years, we have seen campaigns to rewrite the history of several democratic nations in a way that undermines their solidarity as communities, their sense of achievement, even their very legitimacy. History requires careful interpretation of complex evidence, and should not be a vehicle for facile propaganda.

Burning the Books by Richard Ovenden review: we can't keep all records – so what do we destroy?

Books get burnt, online data will be wiped. Is there a failsafe way to preserve knowledge? By Christopher Howse

It is undoubtedly true

It is undoubtedly true*, but in every library there are considerable numbers of important contributions to literature which are simply buried neglected for want of proper research, because by an accident of birth they appear in a volume with other equally important works, which have been lumped together without any distinguishing title pages, or have been disguised under some misleading title.

The component parts of the transactions of many of the learned societies represent in a large number of instances results of scholarly research of much greater value to the interested, than the more ambitious but less trustworthy works which are allowed to encumber the shelves. Every item recovered from this buried material and made accessible adds to the available resources, and often is more valuable than the purchase of new volumes.

There has never been a question as to the desirability of getting at this hidden material, but the question of ability to carry out the work with the limited resources at the disposal of many has long taxed readers.

It is this conundrum that Cosmo Books.co.uk has solved for many readers. With over 150,000 titles in stock our unparalleled stocks are the go-to resource you need today.

*From the Prefatory Notes, The John Rylands Library, Manchester: An Analytical Catalogue of the Contents of the Two editions of "An English Garner", Manchester, 1909.

For more on this topic read our article Periodicals & Why They Matter which you can find by clicking here.

A commentary piece from The Telegraph that may resonate with users of this website:

I’ve stumbled into the lost world of Victorian boyhood

Recently I've been mesmerised by my late grandfather’s old comics – an extraordinary record of a culture, a country, that has gone for good

Spirit of the age

A passionate polemicist and radical Romantic, William Hazlitt was the most brilliant essayist of his day. But since his death 170 years ago, he has been largely forgotten. Now, as a monument to Hazlitt is unveiled in Soho, Tom Paulin welcomes a revival of interest in a timeless critic of pomp and power.

I'd like to be notified of new arrivals in the following categories.

Check all categories that are of interest to you.